I received an email from Texas State journalism student Lesley Ornelas today with an odd request:

My name is Lesley Ornelas and I am currently a journalism student at Texas State University in San Marcos,TX.

John Goheen recently spoke to one of my journalism classes  and asked that we help him find the boy in his Lemonade Kid news story. He would like to do a follow up on him.

I found a post about the video on your web site.

I see that you have a large following and was hoping you could post something on the site to help in the search.

This is the basic information I have so far about the boy.

His name is either Sean or Shane and the video was shot by Lake Washington in a suburb of Seattle, Washington.

If  anyone has info on this kid–now an adult– let me know and I will pass it on. The “Lemonade Kid” is one of may all-time favorite nat sound pieces and one the my early inspirations for doing video at my newspaper.

Here is my original post on The Lemonade Kid:

In my  “What can we learn from TV news shooter’s” post, I asked if anybody had a link to The Lemonade Kid nat sound piece I’d seen years ago. Thankfully “Thom4” came through for me and found it, and other classic videos shot by master video storyteller John Goheen.  The Lemonade Kid really peaked my interest in video storytelling early in my still photojournalism career.  I believe I saw it at a NPPA Flying Short Course way back in the early 90’s. It just blew me away. Watching the Nat sound package back then, I had no concept of how it was edited together. All I knew was that it just worked brilliantly as a story. I watched it again today for the first time since I gained some video editing knowledge. What I saw was a master class in video sequencing. This is not a hard news story, or some barnburner with action. It is just a slice-of-life story, with a precocious kid as the star attraction of a street corner lemonade stand. “Thom4” writes:

“Thanks for the respect and a chance to provide you with the link to one of my favorite TV nat sound packages “The Lemonade Kid.” It was shot by photographer John C.P. Goheen and you can watch it by going to Terranova Pictures under the television projects tab. I heard John speak and show his work at a seminar more than 12 years ago in Atlanta. I had never seen this type non-narrated story before. John does some of the most amazing television photography I’ve ever seen. I would jump at a chance to spend more time learning from him. I steal all my best ideas. By the way, I’m a TV news photographer working in Orlando, FL. I’ve been shooting video for 13 years now.”

Play it through once and just enjoy it. Then play it again and watch the edits carefully. Look at how they flow. Watch how effectively Goheen uses his detail shots and the sequencing of wide, medium and tight shots. The other thing that works in the piece the way the narrative is gathered. A wireless mic was all that was needed to capture the sound of the kid and the customers. This allowed Goheen to pull back and get nice long shots without missing a beat in the audio. After checking out The Lemonade Kid, click on Keith’s Lunch, yet another Goheen classic. I wish the compressions on both were better, but I am just grateful as hell to see these stories again. Truly inspirational.

Final Cut Pro and Express users have long been frustrated with Apple’s lower thirds title generator for it lack of features. Many of the problems have been fixed in this free Final Cut plug-in by Alex Gollner.  It provides more typeface, position and design options for adding text to productions. Simply download it and drop it in your Final Cut plug-in folder here: Your Startup HD/Library/Application Support/Final Cut Pro System Support/Plug-ins. It’s not to fancy like a Motion template, but for quick lower thirds on deadline, this will to the trick.

I haven’t really explored the many options for plug-ins for Final Cut. Anybody using a plug in that they can’t live without? Please share your comments…

Reflections Med Spas of Spokane host Botox parties to entice woman to use their cosmetic services.

The great thing about shooting video for newspapers is that you don’t have to fit the storytelling in a confined format like TV news does. The last two videos I have produced for Spokesman.com were done with totally different  storytelling approaches. The first video I did was on a local day spa that hosted a Botox party for women. Here, I let the subjects at the party tell the story. I shot it in one evening and then futzed around with the edit for couple of days in between daily still photo assignments. The other video was on a snowboarding competition held at a local college.  I tried a totally different approach with this video. A daily story planned for the page one, so I didn’t see the need to do the same print story in video. Time was tight and I really wanted to get home in time for dinner. 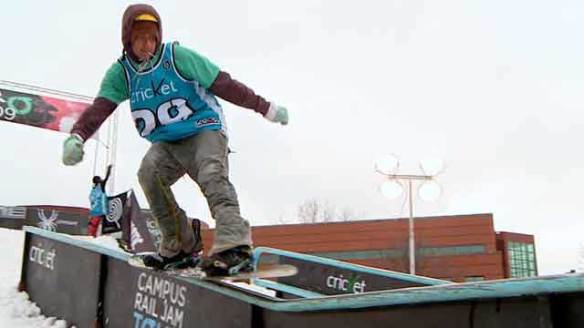 The Botox story was all about people. Getting them to tell me why they felt the need to get Botox injections was key to my story. I did interviews with a doctor and the director of the spa, which gave me the narrative framework for my story. Then I just filled in my timeline with other quick-hit interviews. From a low angle, I did a fun interview with a woman who was face down in a chair getting a massage. With my raw video, I edited a story that was fairly linear. I opened with women socializing with wine and hors d’oeuvres as my beginning. Then moved on to them getting free massages and facials for the middle. Finally, I shot copious amounts of footage of several people getting facial Botox injections to lead me out of the story.

With the snowboarder story, I ditched all my normal storytelling conventions. My Sony EX-1 video camera has the ability to over crank video for ultra smooth slow motion. This was the first time I have experimented with this feature and I am mesmerized by it.  My video is two minutes of snowboarders riding the rails. A music track is my only audio. Many boarders fell on their butts and heads, which the slow motion effect made it fun to watch. I think there is lots of room left to experiment with different storytelling methods. My two daily videos will probably not win any awards, but I hopw the viewers, who took the time to watch, were at least entertained by what they saw.

This month’s issue of The Digital Journalist is dedicated to newspaper video journalism. Publisher Dirck Halstead called me a month ago and asked me to write a story about how I transitioned from being a still photographer to becoming a multimedia producer at my newspaper. Writing about my journey, I’ve found, has been mildly therapeutic.  My last five years as a visual journalist have been an intense and challenging. Through it all, I remain confident that video storytelling at newspapers will survive and flourish.

This issue was guest edited by Ken Kobre and Jerry Lazar, who did  fantastic job of touching on all the video journalism bases. Stories include:  “How to Build an Emmy-Winning Videojournalism Department” by Kathy Kieliszewski of the Detroit Free Press, to a look at how Erik Olsen, a former ABC TV cameraman, transitioned to being a one-man band video journalist for The New York Times. Also check out “Ken Kobre’s 10 Tips for Dramatically Improving Your Videojournalism Stories.” Halstead also wanted me to upload about 30 of my favorite still photos I’ve taken over my career. You can check out that gallery here. This is one Digital Journalist issue you won’t want to miss.