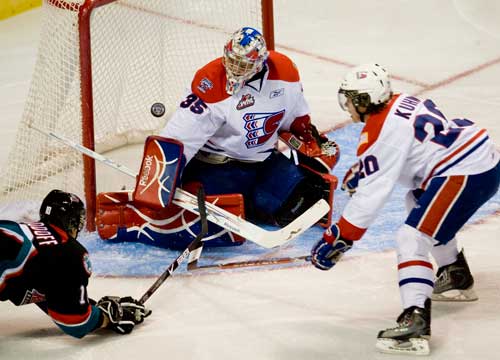 A slap upside the head always comes when you least expect it.

“You have the coolest job ever,” said a hockey fan standing behind me admiring one of my photos at the Spokane Arena last night.  I was on deadline preparing to transmit my pictures of a blowout Spokane Chiefs hockey game back to the paper when those six words stopped me cold.

“You have the coolest job ever.”

Up until that utterance, I’d beg to differ.  It had been a long 14-hour day and I was tired. I started in the morning shooting a freelance job. I take extra work now whenever I can.  It helps make up for the furlough days and pay cuts I have endured over the past year.

The economic trauma and turmoil facing my and every other newspaper in the country weighs heavily on my shoulders at times. When someone asks me why I entered the newspaper biz, I tell them it’s because I have a passion for telling stories.  Like any good photojournalist, I see the world a bit differently from most people. There is a creative energy that burns inside me.  When I put a camera up to my eye, life becomes my palette.  I felt it when I bought my first professional camera in high school and I still feel it today…well most days.

“You have the coolest job ever.”

Looking back over the past seven days at some of what I have produced for the readers of my newspaper and viewers of our website, I realize that I can’t let the uncertainty of the future kill my creativity. Today, I put a sticky note on my computer monitor that simply says, “Try Harder.” It is my little reminder  that  (slap upside the head)  I do have the coolest job ever!

These are some of the highlights of my past week– a mix of multimedia and stills. 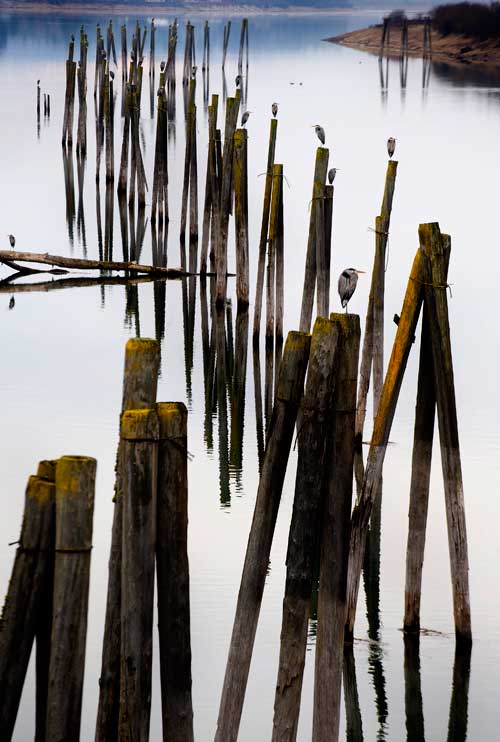 Several dozen great blue herons were perched on pilings in the Pend Oreille River at Usk, Washington Tuesday, March 2, 2010. Area birding enthusiasts said this is the time of year large groups of the giant birds can be seen migrating and resting in certain areas, such as the Pack River Delta along Lake Pend Oreille. Soon they will disperse in smaller groups to nesting rookeries in cottonwoods or other woodlands near water.COLIN MULVANY colinm@spokesman.com

Tim Michaels, who lost part of his leg in a grain elevator accident holds a wooden foot carving a relative brought him during his stay at Providence Sacred Heart Medical Center in Spokane, Wash.

The king of Cat Tales Zoological Training Center gets a root canal.

In the Kalispel Tribal Language Program, new Salish speakers immerse themselves in daily conversation with elders and then teach what they have learned in nearby public schools.