This camera is one bad boy. Yesterday, I set my ISO at 4000 and left it there for three photo assignments. ISO 4000 looks like 800 did on my vintage Nikon D2h  of just a few years ago.

My newspaper has always been a Nikon shop. Though I was tempted by all the low-light Canon camera offerings of yore, management never blinked or gave my informed blathering much acknowledgement to make the switch. Now I’m glad they didn’t listen to me.  This camera kicks! In the past, when I needed to spin the ISO dial up to, say, ISO 3200, I would often regret the decision later. Noise in digital files looks horrible.

This camera easily handled 4000, and 6400 ISO. I haven’t needed to go higher on the account that I don’t need 500th of a second for an environmental portrait.

Take a look at this shot I did of my daughter Brenna, right, and her friend Shea. 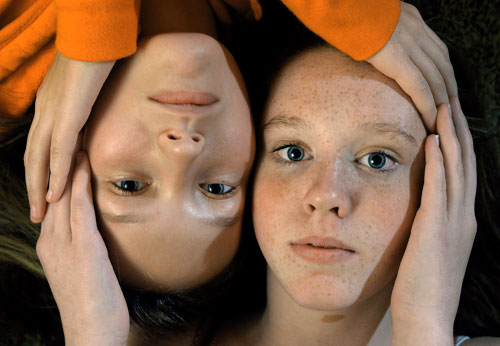 I shot it on my living room floor with just lamplight at 6400 ISO in RAW. I tweaked the color to get the skin tones right and made just basic Adobe CS5 RAW converter adjustments. If I had shot this with my D2h, it would have noise the size of gravel.

This camera will open many new low-light avenues for me and any other shooter lucky enough to get their hands on one.  I had to go through Nikon Professional Services to find one. I’m told they are as elusive as unicorns.

The next thing for me to tackle is the whole DSLR video learning curve. I have shot video for five years. My Sony Z-1U and XDCAM EX-1 have served me well.  Lately, I’ve been feeling I’m on the outside looking in as the Canon 5D Mk II has dominated  the video gear spotlight.

Mostly, I suspect, for the look of the files coming out of these cameras. Shallow depth-of-field is all the rage, but at what cost? Audio is a DSLR camera’s Achilles heel. The contraptions DP’s and video producers are building to make these cameras work gives me pause.

If I was the subject of a story and someone came at me with a steering wheel contraption laden with mics, lights and other paraphernalia,  I’d probably freeze up like a deer in headlights.

So my toe dipping starts with the limited video capabilities of the D3s. It has been much maligned for not shooting in the higher resolution of 1920p that Canon cameras do. This doesn’t really concern me. The test files I’ve shot so far look better than anything that comes out of my XDCAM. The huge full-frame sensor in the D3s makes shooting in the dark a breeze. Its 720p file size is just about right for the web-based video storytelling I do.  I have to compress the hell out of the videos I shoot, so the huge files from a 5D Mk II will only slow my edit down. I’m not planning to shoot any Hollywood movies, so I’m cool with the Nikon’s smaller file size for now. Of course, in a few months, my camera will probably be rendered obsolete by the rumored Nikon D4. Such is life of a techno geek.

Newspaper websites historically have never been photo friendly. In the first five years of the active Internet, most photos were compressed to a postage-stamped size of around 15k -30k. They had to in those promising days of 28K modems, where one oversized graphic element would bring a homepage to a screeching halt.

I think many photojournalists gave the early Web a big thumbs down as a place to display their work. At my newspaper, us photojournalists’ collectively shrugged our shoulders when the “web guy” would say that he posted one of our photos online.  Later requests on my part, to up the size on our online pictures, was met by one photo manager’s insistence that the images would be downloaded (stolen) or mass-produced across the internet. At that moment I gave up trying and, instead, embraced video as my online medium of choice.

Then, several years ago, Boston.com’s The Big Picture blog rocked my world when it launched.  Here, finally, was a large format online gallery that showcased photojournalism the way it should be. The images were displayed in a format that also didn’t frustrate the viewer with slow page loads. The minute I saw it, I knew we had to have something like it for Spokesman.com. Unfortunately our web team was in middle of developing a ground-up overhaul of our CMS, and it never made the priority list.

While I waited, other newspapers around the country embraced the idea of increasing the format size of their photo galleries. The New York Times Lens Blog, Los Angeles Times, the Chicago Tribune, and many others started big picture galleries.

A few months ago, Ryan Pitts, Spokesman.com’s online director, who was damned tired of my whining, came to me with a surprise. “ I built you a big picture gallery,” he said. After picking my jaw up off the floor, I took a look at what he built.

I was nothin’ but smiles the rest of the day. He gave me the keys, so to speak, to a beautiful Corvette. Behind the scenes, the gallery is really nothing more than a tool that I can access through our web-based Django admin page. I just upload my photos, paste in the captions, add some intro text and a headline, hit save and, drum roll please, instant big picture gallery. The nice thing is, because it is a web-based tool, I can create a gallery from anywhere in the field. 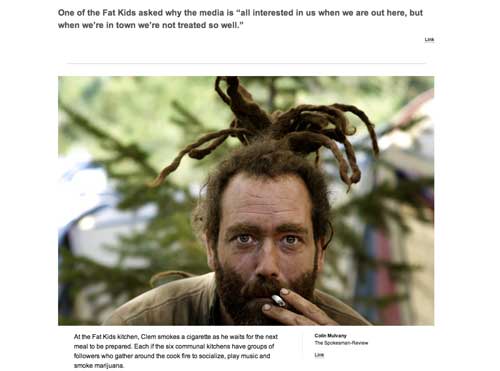 What I like best about our gallery is its clean design. For a long time I pushed the idea of a black background for photos, but our gallery is white and I am fine with that. In fact, I think it is easier on the eyes. I also like how I can pop in drop quotes in between the photos. I am pushing to have commenting on the gallery, which I hope will be enabled soon.

Update: here is some more  links to big picture galleries: Tampabay.com’s All Eyes, SacBee’s The Frame Any more? Send links my way…