As I transition to shooting video stories with my DSLR camera, I have tried to mitigate the shortcomings of doing so. Truth is, a traditional video camera is so much easier to use. When I compare video shot with my Sony XDCAM EX1 with that of my Nikon D3s, the look is stunningly dissimilar. The EX1 is no slouch in image quality, it’s just that saturated, cinematic look you get from the massive full-frame Nikon sensor is so visually appealing.

In a previous post, I talked about the challenges of shooting a video story with a DSLR camera. My first few attempts went better than I expected, but the audio and focusing challenges were a huge issue for me to overcome. At the end of last year, instead of requesting a new camera from our remaining capital budget, I outfitted my D3s with a bunch filmmaking accessories. 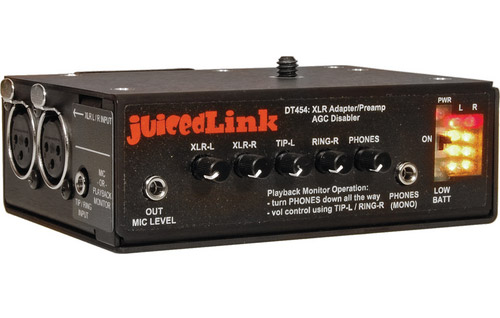 First up was getting an audio interface to deal with the audio limitations of the DSLR. Video with a DSLR has always played second fiddle to the primary function of shooting stills. Many shooting with DSLRs use a dual-system audio, which means they record the audio with a separate digital audio recorder. The new high-quality waveform is then linked to the video in post. I found this method to be cumbersome and fraught with many chances to screw up or miss key audio storytelling moments. Many of the interviews I do are spontaneous, where I walk up and get quick remarks or sound bites from a subject. I have seen amazing DSLR camera rigs where filmmakers mount Zoom H4n recorders to the camera. It all seems a bit much to me.

My solution is to use an audio interface called a JuicedLink DT454 4-Channel DSLR Camera Microphone Preamplifier. It allows me to connect, via XLR inputs, my pro mics—a Sennheiser Me66 and Sennheiser G2 wireless. I have full control of adjusting my mic levels for each channel. I can also monitor the recording levels through the headphone jack, which is head-scratchingly missing on most DSLRs. It is thankfully changing now with on-camera headphone jacks in both the new Nikon D800 and D4 as well as the just announced Canon 5D Mark III.

The JuicedLink is pretty light and doesn’t get much in the way of shooting stills when needed. There is no problem mounting a tripod or a Zacuto Gorilla plate to the unit.

The things I don’t like are that you need an Allen wrench to bolt it to the bottom of the camera. It’s not easy to remove the unit in a hurry when you just want to shoot stills.  Another, is the on/off switch is about a flimsy as the come. Build quality construction runs from excellent to cheap. In fact the whole unit kind of looks like it was made in an inventors garage. There are other units out there, including this just announced Beachtek DXA-SLR Pro. The JuicedLink works especially well with Canon cameras as the unit can be calibrated to each model. With the Nikon cameras, I have only three in-camera mic sensitivities to choose from. Low, Medium and High. Low (1) I found it works best to prevent audio distortion. The unit comes with +48v phantom power, but I keep it switched off and just use battery power in my mics.  The JuicedLink uses a 9-volt battery and will drain much faster if it is in phantom power mode.

The bottom line, if you want to simplify gathering audio with a DSLR and be able to use your pro XLR mics then a JuiceLink or similar unit will give you that.

Part 2 coming soon: Getting stable DSLR video without a tripod.