Robert Rozak, President of JuicedLink, compares and demonstrates the different preamps and digital recording devices for their low noise capabilities . The key information he stresses is that a preamps connected to a DSLR camera are just as good if not better that recording audio separately with say an Zoom H4n. Take a listen and judge for yourself.

In this part two examination of DSLR accessories, I look ways to outfit your camera to ensure stability of your video (see part one on the Juicedlink audio interface.)

I shoot primarily news video for my newspaper’s website using a Nikon D3s as a video camera. It captures only 720p HD video, not 1080p of the newer models, but it’s resolution perfect for most online delivery.

One of the issues I’ve had as I transitioned from shooting with a Sony EX1 video camera to now using a DSLR, was the stability of my video. When handholding a DSLR during a shoot, I founds it almost impossible to capture stable video. Because I couldn’t put the camera up to my eye when shooting in live view, the shaky-cam effect from holding the camera unsupported out in front of me was really pronounced. It made me realize  how much the optical stabilization on most traditional video cameras work to minimize camera vibration.

In putting my DSLR video camera kit together, I looked for the best lens I could find that would not only give me the zoom focal lengths I needed, but would also have built-in image stabilization. My final choice was the Nikon 24-120mm f/4 VR lens. 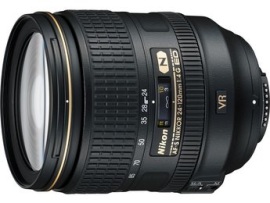 I can attest that VR works. I’ve seen and shot a lot of handheld DSLR video that was so shaky it was unwatchable. Switching VR on will not make your footage look like it was shot on a tripod, but it will smooth it out considerably. In my video below, I used the Nikon 24-120mm with VR for the first time. I was pleased with the results. VR  allowed to  move with my subjects without encountering the jarring shake of typical handheld footage. I was most impressed with the clip of me running with the subject. No way would this look this smooth without VR.

The next accessory I use for stabilizing my DSLR video is the wonderful  Zacuto Z-Finder optical viewfinder that I attach to my camera’s rear viewing monitor. This allows me to press the eyepiece against the bridge of my shootin’ eye, which helps stabilize the camera–especially the up and down movement you get when holding the camera out in front of you. This, paired with the lens VR, really makes for some excellent looking handheld footage.

Finally, I can’t stress enough about having a solid tripod handy on EVERY shoot. I always try to use a tripod for long interviews. This allows me to spend time looking my subject in the eye, rather than hiding behind the camera monitor.

The best video tripods are ones that have a fluid head, which allows you to do smooth pan and tilt movements. I have three that I have access to, from small (light) to large (heavy.) The one thing that I have come to love about shooting with a tripod is that I can frame a shot and then shoot a three-shot sequence of wide, medium and tight ten second clips. When I edit, I have three different views to choose from—and best of all, they are all rock steady.

I could go on about camera rigs and such, but in my type of work, they are a bit much for what I do. As a one-man band, I find keeping it simple is the best hedge against missing shots and moments. One of the things that I don’t want to do is create the three-headed monster camera rig that would draw too much attention to myself.

In part three, I will look at the Zacuto Finder up close and a round-up of the other necessary accessories to outfit your DSLR to make it a bad ass video camera.