Someone should just put a deadbolt on my laptop lid. When I peruse my Twitter feed I see nothing but scary newspaper industry news, which flows like a river of red ink across my pixels. Reading too much of it makes me think a prescription for Prozac might be in my future. I’ve begun to notice even journalism pundits have started to turn on each other by criticizing the need for yet another conference on “Envisioning the Newspaper of Future.”

Truth be told, no one really knows when printing presses will grind to a halt and news delivery boys and girls will be forced to hang up their logoed paper bags for good.

I had to laugh,  last week in Portland, Oregon, my former newspaper editor Steve A. Smith was the keynote speaker at “We Make the Media”—“A conference held to develop real-world plans for new media organizations to fill the journalism gaps left by shrinking news staffs at legacy media organizations.” As Smith was speaking about the need to save “professional” journalism, back in the corner of the room were a bunch of self-proclaimed snarky bloggers and citizen journalists who took offense to the notion professional journalism should be saved. Of course they twittered their opinions of Smith’s speech in real time. This, I guess, is the new digital divide, where any journalist older than thirty is viewed with mistrust. Hmmm, where have I heard that before?

It does seem the pace of handwringing is accelerating. The print folk, locked in their silos, are defending their turf as they make their last stand. Online departments are taking the brunt of the next wave of job cuts. If newspapers can’t hold the line on circulation and revenue, it will soon be curtains for the rest of us still drawing a paycheck. Or so I’m told. I hope I can last a bit longer, only because I truly believe, if we can make this digital transition, the future will not be as dismal as I was once led to believe.

Here’s my vision of how I see it playing out in the near future:

Finally, a few words about content. Our journalism is what’s most important and will no doubt have to be upgraded. Words and multimedia will need to work better together. The strength in the touch tablet is in its multimedia capabilities. Visuals like photo galleries, graphics, and hi-def video, will add value. Like your current Web site, the front page of the digital newspaper will change as stories are updated throughout the day. The page design will slowly change to integrate new content features.

Once this happens,  the true digital media revolution will begin to take place. Yes, the presses will eventually stop, which will only strengthen digital media’s position. Freed of the cost of printing and distribution, more resources will go to content creators. This is when the fun really starts. True innovation will kick in with each new tablet version. New types of devices will drive even more innovation and hopefully a super-renaissance of journalism. My vision may be utopia to some, but the internal optimist in me really believes there is a future in professional journalism. 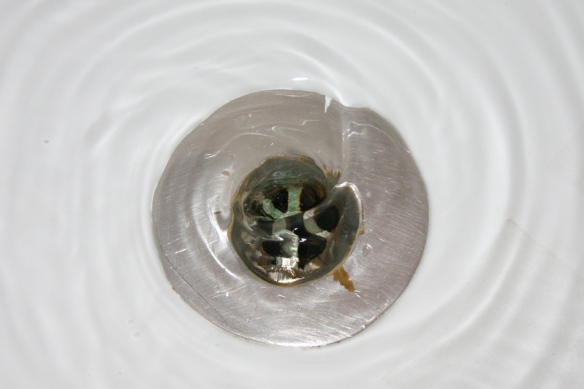 Last week I stood in front of a convention of high school journalists and told them a career in journalism was still a solid prospect. I bit neither my lip nor tongue as I said this. For most in the room, it will be 5-7 years until they complete college.  In that amount of time, newspapers are going to experience a lot of change.

In this month’s Digital Journalist, an essay called “Circling the Drain,” by Mark Loundy summed up the present state of newspapers perfectly:

“Newspapers are trapped between two worlds. They can’t offer a viable online service because they can’t spend enough on staffing. Meanwhile, they’ve lashed themselves to a sinking ship that they’re bailing out by tossing journalists overboard. Of course, this drives readers away, causing the ship to sink faster.”

As many printed newspapers sink into irrelevance in their communities, the big question left hanging is what will replace them? Will newspaper publishers wake-up and invest in their online news sites, while also finding the courage to cut away their failing print products? Can they find a way to make the boatloads of profits online they once had in print?

In some ways, I don’t think it matters whether newspaper online websites survive either. When I looked out at that room full of high school journalism students, I realized they are going to be the ones that will define the revival of journalism in the digital age. This is a group that rarely reads the printed newspaper. When I ask them why? I get answers ranging from: “It’s not searchable,” and “The newspaper limits my ability to connect with multiple points of view,” to “I’m online all the time, so I sometimes will read it there.”

As I anguish over the present state of print newspapers, I’m likewise excited to see the future of online journalism begin to take form. Hyper-local sites are starting to claim ground where traditional journalism fails to defend.

“Here’s the most awesome things about my new job: I’m now a TRUE multimedia journalist. On any given day, I will write a story, take pictures, produce videos, or create maps to illustrate stories. I’m learning a lot of new skills dealing with beat reporting and developing sources.”

It will be young people like Grant who will be the ones to shape digital journalism’s future. Many of these online experiments will fail, but in time, some formula will stick.

And don’t discount the castoffs from newspapers. They will also have an effect. There are a lot of talented former print reporters and visual journalists that are looking for online palettes to display their talents. Smart people don’t wallow in the past for long.

I know newspaper publishers understand that as their print product flounder, they need to be in a solid position to compete with their websites. The movement to online-only news websites will open up the conduit for new jobs in journalism. So for high school students interested in a career in journalism, I say: Come forth, be passionate, be curious and most important, be innovative.

After judging the video categories in this month NPPA Monthly Multimedia Contest, I am disheartened at the overall quality of the storytelling being entered. Entries are down by a third. I’m wondering if it’s because of the recent layoffs sweeping our industry? Or maybe other producers, like me, are being asked to focus on more traditional photojournalism for the newspaper.  It could also be everyone is too depressed to do good work.

These are dark times. The best and the brightest are being forced out on the street daily. But what of the rest of the journalists who, with some luck, will be the last few standing in their gutted newsrooms? I, for one, didn’t spend the last five years learning multimedia skills to just roll over and die.  I keep telling myself to look at the big picture. The media pundits have been predicting the collapse of newspapers for years. And now that it’s here, we are all feeling the pain. The key to survival is being able to make it through this slow transition from print to online.

The mass slaughter will continue for some time, but when it ends-and it will end, publishers will have to make some pretty tough decisions.  I think everyone is in agreement that the future journalism is primarily online. Great journalism is not about the delivery method, but it’s embedded in the words, pictures and videos that reach out to our communities and the world.

Beyond being terrified of my short-term future, I am also cautiously optimistic. Hopefully, I will be allowed to be a part of the reimagining of journalism.  It is still pretty fuzzy about what form it will take. Everyone left will need to be an innovator. If we can find a revenue model that works, then I hope a journalism renaissance will take place.  Freed of the legacy chains of the past, new opportunities will surely germinate.